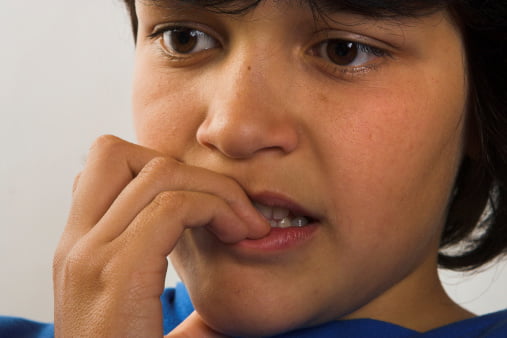 Here are 5 uncommon symptoms and signs of anxiety in a child that often goes unnoticed!

Anxiety, the feeling of being nervous or restless or on the edge is as it is so confusing that sometimes even adults fail to recognize the symptoms in them. Anxiety is a normal response to something dangerous or stressful. It becomes a problem when it shows up at unexpected times and takes a particularly firm hold. Some children who may be shy or introverted may actually find it doubly difficult to express their feelings of unease. In general, children do find it difficult to vocalize or say what’s nagging them. Anxiety disorders are common, treatable medical conditions that affect one in eight children.

Anxiety can prevent your child from making friends, raising a hand in class, or participating in school or social activities. Feelings of being ashamed, afraid, and alone are not uncommon. Anxiety disorders also often co-occur with other disorders such as depression, eating disorders, and attention-deficit/hyperactivity disorder (ADHD). When symptoms last for a short period of time, it may be a passing case of “the blues.” But if they last for more than two weeks and interfere with regular daily activities and family and school life, your child may have a depressive disorder. Here are 5 uncommon signs of child anxiety that should not be missed by parents or teachers:

While headaches, lack of appetite, indigestion (including constipation) are easy to relate with anxiety, do you know that even pulling hair is a major tell-tale sign that your child is bothered by something. They won’t always tear the hair out (though that happens in some cases), but they will clutch their hair and yank at it. Some children also pick at their skin, bite the insides of their cheeks, chew nails, and bite lips. Other indicators that could be due to nervousness are constant coughing, dry mouth, sweating, breathlessness and even dizziness.

2. Preferring to be alone:

The #1 unhealthiest, go-to coping mechanism for anxiety is AVOIDANCE. Avoid at all costs. Your child used to love playing in the park and now they are refusing to go. Your child always wants to stay home and refuses to go to restaurants and stores with you. Or is mostly not willing to meet-and-greet people/ guests. This is a classic first step towards learning to bottle things up within themselves. The child is confused – she doesn’t comprehend what she is feeling – so prefers to be alone to internalize things. This is real, guys. Children think a lot more than adults do!

When a child starts avoiding situations they used to enjoy – it is time to take a second look at why. It might be that they simply no longer like the park – but it might be something more significant.

When we shifted cities, my son was a 4-year-old who LOVED the idea of school. So much so, that he used to whine on Sundays, wanting to go to school. But as we moved, and he consequently  had to change school, he would whine every other morning about not wanting to go to school. It left me as well as his teachers highly confused. It was only a few days later that he confessed he was ridiculed by some older children in his class because he would only converse in English and they could not understand what he was saying! “If I don’t go to school, they won’t tease me” – this one sentence hit me really hard. It took a lot of effort to try and get him out of that shell. I would get the house-help to have conversations with him in Hindi or take him with me to buy vegetables so he could talk to the vendor. I was also good to have a couple of classmates living close by. We organised ‘movie-time’ at home or small lunches where the kids mingled with each other.

If your child stuffs their worries way down deep – the only way they will bubble to the surface is in the form of anger and resentment. They come home from school ready to explode. Bedtime brings with it rage and resistance. New situations cause unusual hostility and defiance.

Anger can be tricky. Kids can be angry for so many reasons. They might have difficulty self-regulating. They might have a mood issue. They might have a hard time accepting no. But along with the usual contenders, anxiety can be the underlining cause of anger too. Pay attention to when and why your child gets angry – as it could be the key to unearthing the true cause.

A friend’s daughter just would not go to bed before she had lined up all her dolls in a perfect row and covered each one with a hankie (their ‘quilt’)! She would make her mother narrate a particular story over and over again – for a certain number of times – before she slept.

My friend mistook this ritualistic behavior for her routine. Routines are comforting and predicable. Rituals are rigid and need to be redone if not done “correctly.” Routines are a healthy part of childhood – rituals are an indication of anxiety. Any rigid ritualistic behavior can make your child painfully fastidious. Rituals, if not corrected, also have the tendency to mature into OCDs – Obsessive Compulsive Disorders.

Did you find out your child had anxiety in a way that was different? We’d love to have your comments and suggestions and share them with the world.

Thought for the day – Our gifts to children

Parents! Kindly do your homework well

5 Practical reasons why your child needs a sibling

Celebrity mothers are no different from us

Parenting Teen – How to stay connected with your adolescent